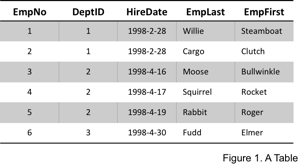 There are three forms of columnar-orientation currently deployed by database systems today. Each builds upon the next. The simplest form uses column-orientation to provide better data compression. The next level of maturity stores columnar data in separate structures to support columnar projection. The most mature implementations support a columnar database engine that performs relational algebra on column-oriented data. Let me explain…

There are two powerful compression techniques that individually or combined provide most of the benefits: dictionary-encoding and run-length encoding. For the purposes of this blog I will describe only dictionary-encoding; and I will do an injustice to that by explaining it only briefly and conceptually… just enough that you get the idea.

Further compression is possible by encoding runs of similar values to a value plus the number of times it repeats so that the bit stream 0000000000000000 could be represented as 01111 (0 occurs 24 times).

You can now also start to see why column-orientation compresses better that a row-orientation. In the row block above there is little opportunity to encode whole rows in a dictionary… the cardinality of rows in a table is too high (note that this may not be true for a dimension table which is, in-effect, a dictionary). There is some opportunity to encode the bit runs in a row… as noted, you can expect to get 2X-2.5X from row compression for a fact table. Column-orientation allows dictionary encoding to be applied effectively to low cardinality columns… and this accounts for the advantage there.

Dictionary-encoding reduces data to a compressed form by building a map that provides a translation for each cardinal value in the table to a tightly compressed form. For example, if there are indeed only three values possible in the DeptID field above then we might build a dictionary for that column as depicted in Figure 4. You can see… by encoding and storing the data in the minimal number of bits required, significant storage reduction is possible… and the lower the cardinality of a column the smaller the resulting bit representation.

Note that there is no free lunch here. There is a cost to be paid in CPU cycles to compress data and to decompress data… but for a read-optimized data warehouse database compression is cool. Exactly how cool depends on the level of maturity and we will get to that as we go.

It is crucial to remember that column store databases are relational. They ingest rows and emit rows and perform relational algebra in-between. So there has to be some magic that turns tuples into columns and restores them from columns. The integrity of a row has to persist. Again I am going to defer on the details and point you at the references below… but imagine that for each row a bit map is built that, for each column, points to the entry in the column dictionary with the proper value.

There is no free lunch to column store… no free lunch anywhere, it seems. Building this bit map on INSERT is very expensive, and modifying it on UPDATE is fairly expensive. This is why column-orientation is not suitable for OLTP workloads without some extra effort. But the cost is amortized by significant performance gains for READs.

One last concept: since peripheral I/O reads blocks imagine two approaches to column compression: one applies the concepts above to an entire table breaking each table into separate column-oriented files that may be read separately; and one which applies the concepts individually to each large block in a table file. Imagine, in the first case that Figure 2 represents a picture of the first few rows in our 1M-row table. Imagine, in the second case, that Figure 2 represents the rows in one block of data re-oriented into columns.

This second, block-oriented, approach is called PAX, and it is more-or-less the approach used by Exadata. In the PAX approach each block contains its own mini-column store and a dictionary for dictionary encoding with the values in the block. Because the cardinality for columns within a block will often be less than for an entire table there are some distinct advantages to PAX compression. Compression will be higher by more than a little than for full table columnar compression.

When Exadata reads a block from disk it decompresses the data back into rows and performs row-oriented processing to complete the query. This is very cool for Exadata… a great feature. As noted, column compression may be 4X better than row compression on the average. This reduces the storage requirements and reduces the overhead of I/O by 4X… and this is a very significant improvement. But Exadata stops here. It is not a columnar-oriented DBMS and it misses the significant advantages that come from the next two levels of column-orientation… I’ll take these up in the next post.

To be clear, all of the databases that use these more mature techniques: Teradata, HANA, Greenplum, Vertica, Paraccel, DB2, and SQL Server gain from columnar compression even if the PAX approach provides some small advantage as a compression technique.

It is also worth noting that Teradata does not gain as much as others in this regard. This is not because of poor design, rather it is due to the fact that, to their credit, Teradata implemented a Teradata-specific dictionary-based compression scheme long ago. Columnar compression let others catch up to what Teradata has offered for years.

And before you ask… Netezza offers no columnar orientation… preferring to compress deeply using an FPGA co-processor to decompress… and to reduce I/O using zone maps rather than the using the mid-level column projection techniques in the next blog here.